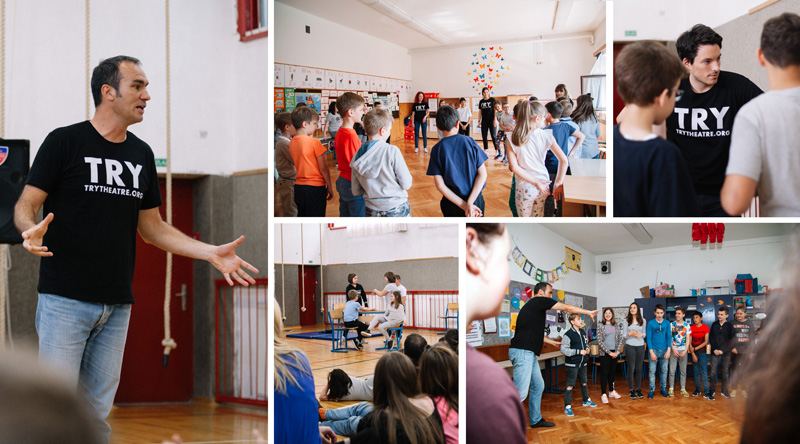 In mid May, TRY theatre was invited to participate in Krešo Golik Day at Ivanka Trohar elementary school – a celebration that took place for the 14th year in a row! Krešo Golik was a film and television director and screenwriter. During his career of over 40 years, Golik directed a number of critically acclaimed feature films, short subjects and television series. As soon as we arrived to Fužine, we were greeted by the Principal and students who held a short presentation about life and work of Krešo Golik, and even showed us their own short film that they filmed and produced at school! In return, we showed them a scene from our latest production – Your Play.

Then, we separated into small groups where TRY theatre mentors and assistants worked closely with students to develop their own short theatre piece. At the end of our workshop, we had a big presentation where every group showed their short piece. It was a true honor to perform in front of the wife and sister of Krešo Golik. The kids were incredibly enthusiastic and full of ideas, and the final results were impressive for just a few hours of work! Big thanks from all of us at TRY theatre to Ivanka Trohar elementary school for such a warm welcome and hospitality! We are so honoured to be a part of your day!